Yesterday, the Fourth Circuit in U.S. v. Washington, in an opinion by Judge Niemeyer, joined by Judge Traxler, with Judge Michael dissenting, rejected the argument that a criminal defendant charged with driving while under the influence has a constitutional right under the Confrontation Clause to cross-examine the lab technician who handled his blood or breath test.

That's one of those issues that became interesting again after the Supreme Court's decision in Crawford, which creates an issue someone might raise any time out-of-court statements are used to try convict someone.
Posted by Steve Minor at 8:11 PM No comments:

It really is that time again

Today the blog has got a ton of hits from Knoxville people, past and present, and not by way of the Instapundit, but instead some Vol fans have discovered this post - still one of my favorites.
Posted by Steve Minor at 5:31 PM No comments:

A few years ago, I filed a motion to dismiss a woman who had been sued only in her official capacity, with this argument:

Besides redundancy, dismissal of official capacity claims is consistent with the policy that litigation should proceed in the name of the real parties in interest, and “will promote judicial efficiency and reduce the chance of confusion.” Keene v. Rinaldi, 127 F. Supp.2d 770, 774 (M.D.N.C. 2000). As the Fourth Circuit has explained, “[w]here, as here, no claim against officials in their individual capacities was made, a simpler, technically correct, and by far preferable structuring would have been to name the [government entity] as the sole defendant.” Spell v. McDaniel, 824 F.2d 1380, 1396 (4th Cir. 1987). Compare Andrews v. Daw, 201 F.3d 521, 525 (4th Cir. 2000) (“the real party in interest in an official-capacity suit is the entity”); Gray v. Laws, 51 F.3d 426, 431 (4th Cir. 1995) (same); Busby v. City of Orlando, 931 F.2d 764, 776 (11th Cir. 1991) (“To keep both the City and the officers sued in their official capacity as defendants in this case would have been redundant and possibly confusing to the jury”); Sims v. Unified Government of Wyandotte County/Kansas City, Kan., 120 F. Supp.2d 938, 945 (D. Kan. 2000) (“When a plaintiff names both a municipality and a municipal officer in his official capacity as defendants in an action, the suit against the officer is redundant, confusing, and unnecessary and should be dismissed”); Luke v. Abbott, 954 F. Supp. 202, 204 (C.D. Cal. 1997) (“it is no longer necessary or proper to name as a defendant a particular local government officer acting in official capacity. To do so only leads to a duplication of documents and pleadings, as well as wasted public resources for increased attorneys fees”); White v. City of Chicago, 1991 WL 204946 at *2 (N.D. Ill. 1991) (“Dismissing the official-capacity claim will serve to streamline and clarify the complaint”).

The motion was granted before the other side replied.

Now I read this footnote in a Buchanan County school board case:

That's really lame, I'm not buying it for a minute. Keeping parties in the case who cannot be liable solely for purposes of "public accountability" is a completely alien concept to any notion of civil procedure that I know about.

Also, you'd think that the individual defendants sued in their individual capacity would have a good shot at a qualified immunity defense to the First Amendment claim in that School Board case.
Posted by Steve Minor at 2:50 PM 2 comments:

The Tortoise and the Hound 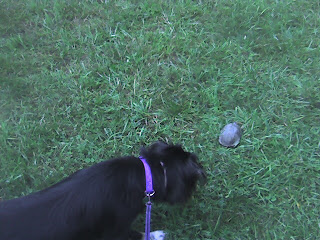 Zeno might have been wrong to suggest that Achilles could never catch the tortoise, but certainly Jenna will not catch the turtle, because it spooked her and so she retired to a safe distance where she could bark at it.

The paradox of Achilles and the tortoise is stated something like this:

"The Tortoise challenged Achilles to a race, claiming that he would win as long as Achilles gave him a small head start. Achilles laughed at this, for of course he was a mighty warrior and swift of foot, whereas the Tortoise was heavy and slow.
'How big a head start do you need?' he asked the Tortoise with a smile.
'Ten meters,' the latter replied.
Achilles laughed louder than ever. 'You will surely lose, my friend, in that case,' he told the Tortoise, 'but let us race, if you wish it.'
'On the contrary,' said the Tortoise, 'I will win, and I can prove it to you by a simple argument.'
'Go on then,' Achilles replied, with less confidence than he felt before. He knew he was the superior athlete, but he also knew the Tortoise had the sharper wits, and he had lost many a bewildering argument with him before this.
'Suppose,' began the Tortoise, 'that you give me a 10-meter head start. Would you say that you could cover that 10 meters between us very quickly?'
'Very quickly,' Achilles affirmed.
'And in that time, how far should I have gone, do you think?'
'Perhaps a meter – no more,' said Achilles after a moment's thought.
'Very well,' replied the Tortoise, 'so now there is a meter between us. And you would catch up that distance very quickly?'
'Very quickly indeed!'
'And yet, in that time I shall have gone a little way farther, so that now you must catch that distance up, yes?'
'Ye-es,' said Achilles slowly.
'And while you are doing so, I shall have gone a little way farther, so that you must then catch up the new distance,' the Tortoise continued smoothly.
Achilles said nothing.
'And so you see, in each moment you must be catching up the distance between us, and yet I – at the same time – will be adding a new distance, however small, for you to catch up again.'
'Indeed, it must be so,' said Achilles wearily.
'And so you can never catch up,' the Tortoise concluded sympathetically.
'You are right, as always,' said Achilles sadly – and conceded the race."
Posted by Steve Minor at 2:39 PM No comments:

The increasing incidence of hourly rates in excess of $1,000 per hour has led some pundits to predict the end of hourly billing. See, e.g, Legal Marketing Blog, Is the Billable Hour Now Dead?

Meanwhile, I recently collected some cases about court-approved rates in the W.D. Va.:

This Volokh post links to a Washington Post editorial favoring confirmation of Leslie Southwick to the Fifth Circuit. Today, however, the Post published this letter opposing confirmation. Professor Bainbridge has this post in response.

In Arlington, a circuit court judge postponed ruling on constitutional issues related to the abusive driver fees, to wait and see whether the party gets convicted and suffers the imposition of the fees, according to this report.

I've never had a client try this defense in a contract case, but it says here that some people are faking death to escape their cell phone contracts.

It says here that newspapers make lots of mistakes.

This Charlottesville story describes increases in the number of foreclosures in Virginia.

I heard on Paul Harvey this story about the blind woman golfer who heard her hole-in-one.
Posted by Steve Minor at 7:28 PM No comments:

In this brief, the Council on American-Islamic Relations complains:

"Some of the most virulent reaction to the government’s naming of CAIR as an unindicted coconspirator can be seen by the reaction of various weblogging pundits. The website JihadWatch.org writes that with the naming of CAIR “[o]ne would think that would end forever the canny masquerade as a moderate civil rights organization, a charade it has been successfully pulling off for years.” Unindicted co-conspirators in Hamas funding case say Muslim civil rights woes increasing, JihadWatch.org, at http://www.jihadwatch.org/archives/016942.php. The website LittleGreenFootballs.com dismisses the civil rights report of CAIR, “one of the unindicted co-conspirators in the case against Hamas-linked ‘charity’ the Holy Land Foundation” as “bogus” and “inflated.” See Unindicted Co-Conspirators Whining Again, LittleGreenFootballs.com (June 15, 2007), available at http://littlegreenfootballs.com/weblog/?entry=25856_Unindicted_Co-Conspirators_Whining_Again&only see also Patrick Poole, CAIR Fingered by Feds, FrontPageMagazine.com (June 8, 2007) (advocating that CAIR should be “abandoned by its friends in Congress, the media establishment, academia, and the federal government, due to the Department of Justice’s identification of CAIR’s terrorist ties”)."

That's harsh. It makes me think of Democrats calling for all Americans to boycott Fox News advertisers.
Posted by Steve Minor at 4:36 PM No comments:

Via Professor Bainbridge, here is posed the question, which is better, UCLA or U.Va? I'm surprised that there could be a side-by-side without mentioning Kareem Abdul-Jabbar and Ralph Sampson, or maybe there was, in the line that said number of national championships - U.Va. 15, UCLA 100.

Via Instapundit, the celebrity guest star this week at CrimProf Blog is Tennessee's own Penny White, formerly of the Tennessee Supreme Court. I went to a Tennessee Trial Lawyers meeting in Johnson City a couple of years back where she was one of the speakers and everyone there was on a first name basis with her except for me.

In the criminal case against former Senate candidate Mark Tate, both sides are trying to take evidence from the past or present lawyers for the other side. Tate wants to use testimony from the Commonwealth's attorney who started the case before recusing himself, and the replacement prosecutor wants to take evidence from Tate's lawyer, who was a donor to the Tate campaign, all according to this article in the Post. Usually, you don't get to cross-examine the other side's lawyer under oath.

Here the Fredericksburg paper reports that someone stole an ATM machine, with a stolen truck.
Posted by Steve Minor at 4:02 PM No comments:

Here's the opinion of one of the bunch that's suing to have the transportation funding statutes overturned as unconstitutional.

Here is a story on the latest appeal in the Darryl Atkins case. It says in part: "

The ACLU did get a good result in the case described here and here, brought on behalf of a couple of anti-Bush protesters, who got $80,000.
Posted by Steve Minor at 5:04 PM No comments:

Frank was in the Bristol paper lately for this article about the thirtieth anniversary of the Surface Mine Reclamation Act, and then again today with an editorial favoring state laws in Virginia to prohibit smoking in public places.

Maybe this is payback from Media General for the unfair piece from Jeff Shapiro way back when.
Posted by Steve Minor at 4:49 PM No comments:

Here is a very lengthy article about the case of Joseph Dick, Jr., and others, who were allegedly involved with a murder in Norfolk, but now claim their innocence.

"At the Keen Mountain Correctional Center, a gray complex of poured concrete in rural southwest Virginia, Joseph Jesse Dick Jr. sits behind the thick glass pane of a prison interview booth like a specimen in an oversize shadow box. A man of delicate bearing with receding reddish brown hair, a sparse mustache and rectangular prison-issue glasses a bit wide on his long, gaunt face, Dick is here because he pleaded guilty to the 1997 rape and murder of his neighbor Michelle Moore-Bosko — a crime he now says he didn’t commit. And maybe he didn’t. Such proclamations of innocence are no longer surprising. The imprisoned man exonerated by DNA evidence or a belated confession by the actual killer or the emergence of a credible alibi witness is a narrative of increasing familiarity. But even in the upside-down world of wrongful convictions, the extravagant case of Joseph Dick and his supposed partners in crime is in a class of its own."
Posted by Steve Minor at 4:46 PM No comments: