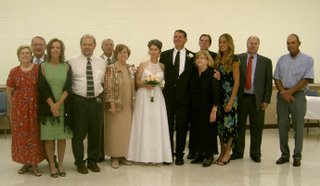 In this crowd are Mom and Dad, Jamie and Frankie, Mack and Audrey, Janice and Ken, Carolyn and Charles, Lois and Tim, and Sam, on the occasion of the wedding of Ken and Janice yesterday.

A few of the readers of this blog have heard one or more tales about people in the group picture. Here is another of the bride and groom, at my parents' house.

I went to the party afterwards. A few tall tales were told in the short time I was there. One was told by Carolyn, who told of trying to chase down one her Brazilian nephews who spoke only Portuguese. Shouts of "stop, stop!" were to no effect. She was told the word in Portuguese was something like "pare" (pah-dee) and so she tried hollering that for a while before another woman there in the store told her to stop carrying on in such manner, the potty was right over there. 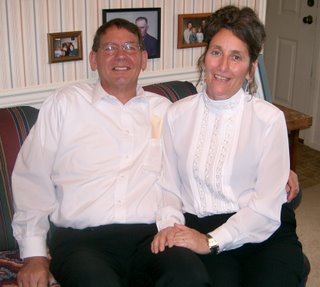