The Daily Progress has this report on a forum for the candidates to succeed Judge Peatross.

Locally, the General Assembly will replace Juvenile and Domestic Relations Judge Gene Lohman. I don't think we will see a similar event for would-be judges looking to replace him.
Posted by Steve Minor at 6:30 PM No comments:

They're putting in those red-light cameras, according to this report.

Some guy with the City is quoted as saying: "This has never been about revenue. It was about safety from the beginning. It still is and will continue to be."

I guess he never read the study described here, or the others like it.
Posted by Steve Minor at 6:18 PM No comments:

Somewhat in the manner of the Jaded JD, it has been written over at the Booby Hatch that "Mr. Minor" hasn't a clue.

I'm arguing collateral estoppel this afternoon, yet hoping that the adjudication from the Booby Hatch will not be binding.
Posted by Steve Minor at 9:29 AM No comments:

Ruby the Tiger has been put to sleep, or so it says here. The Roanoke paper has pictures of Ruby here.
Posted by Steve Minor at 3:00 PM No comments: 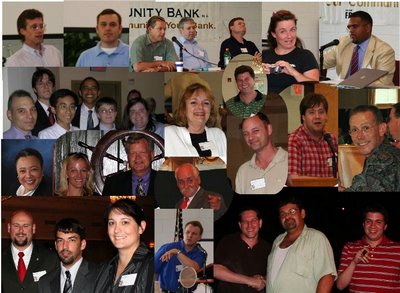 I just saw this month-old collage, and decided to pirate it. Here's the place of origin. Well done, Badrose.

An unexpected dividend of blogging is having met all those people, or most of them.
Posted by Steve Minor at 6:04 PM No comments:

As we debate morning, noon, and night how much longer to keep Chrissy, I recollect this Scheherazade post, where she asked the question, which would you give up, the blog or the dog?

"My dog is 13, bad legs, bad hearing, bad breath, bad manners. She was once declared 'cute' by a future federal judge as she wagged her tail at him in the middle of our town.

I'd say we'd give up about everything we've got for her, if it comes to that, but I'm afraid it won't."

Almost three years later, that's about the size of it - there's nothing much we can do but try to figure out when enough is enough. In this old photo, the dog looks like she is expressing her view of the situation.

S. also wrote this memorable post about her favorite Google search term, which makes me think that things could be worse.
Posted by Steve Minor at 1:12 PM No comments:

The Christians and pagans in Albemarle County

"Albemarle County Virginia public schools allowed pagans to distribute flyers in the backpacks of school children inviting them and their families an event this weekend where they can learn about and participate in pagan yuletide rituals. Some outraged Christian parents objected. But the delicious part of this story is that a threatened lawsuit by Jerry Falwell's Liberty Counsel legal aid group is the reason the pagans can issue such invitations through the public schools."
Posted by Steve Minor at 1:03 PM No comments:

On the bright line rule of Jones v. Jones

Back in October, in the case of Jones v. Jones, the Virginia Court of Appeals in an opinion by Judge Humphreys joined by Judge Elder and Senior Judge Annunziata held that the notice of appeal was a nullity because appellant's counsel was suspended from practicing law at the time it was filed.

The ABA Journal eReport published this article about the case, which begins: "If an attorney with a suspended license files a notice of appeal, the client will pay a price, even if neither the lawyer nor the client knew of the suspension, the Virginia Court of Appeals has ruled."

Carolyn Elefant weighs in: "Stupid result, in my view. Where an attorney knowingly files an appeal and isn't licensed to practice, he deserves blame for the result. But where an attorney doesn't know, why should the client be penalized? In this case, the events all took place over a short period, with the former attorney withdrawing at the beginning of July 2005, the new attorney filing notice of appeal August 9, 2005 and the suspension ending on August 25, 2005. Had the client's new attorney realized that he was suspended through the end of August 2005, he could have asked the client's former attorney to lodge the appeal (or the client could have filed pro se) and stepped in to the case when his suspension concluded. The court's approach rejected this sensible outcome and penalizes the client for an easily avoidable situation."

Fair or not, it sounds like a Virginia ruling to me. Appellate practice in Virginia is gotcha-law. The Court of Appeals based its decision on Nerri v. Adu-Gyamfi, 270 Va. 28, 613 S.E.2d 429 (2005), which in turn relies on Wellmore Coal Corp. v. Harman Mining Corp., 264 Va. 279, 568 S.E.2d 671 (2002), the case involving the multi-million dollar judgment from Buchanan County where only the Kentucky lawyer signed the notice of appeal. Similarly, the Washington Post series on the sorry state of funding for indigent defense in Virginia noted the high level of appeals in criminal cases that are dismissed on procedural grounds. It's pass/fail, the Rules are not intuitive, counsel has relearn them for every appeal. Somehow, the federal appeals court manages to get by without the same harshness, in fact, the clerk's office pretty much spoon-feeds the lawyers from start to finish. I've never heard any of the judges or justices state why they believe the state court rules are just. Steve Emmert in his commentary on the case charitably attributes to Virginia's appellate benches the view that they "genuinely dislike procedural dismissals, and try to avoid them where they can."

Also, I don't know whether the outcome in Jones would be different in a federal case As Marcia Oddi explains here, linking to this article by Howard Bashman, lawyers get fried in federal appeals, too (particularly by two famous Seventh Circuit judges).

I also wonder whether Jones would have been different if the client had also signed the notice of appeal - unlike the parties in the Wellmore case, an individual could represent himself or herself.
Posted by Steve Minor at 11:39 AM No comments:

Get your bargain lawyer

Some excerpts from the ALJ lawyer fee survey, with rates for associates of different degrees of seniority:

Carolyn Elefant at My Shingle says small firm lawyers ought to use this list to show what bargains they are.
Posted by Steve Minor at 11:24 AM No comments: