I listened with interest to the oral argument in the case of Spear v. Omary.

The statutes authorizing the withdrawal of appeals from the juvenile court are new and untried, and they are the work product of the Boyd-Graves conference.

Section 16.1-106.1(F) lists some things that might or might not happen "[u]pon the withdrawal of an appeal from a juvenile and domestic relations district court."

One is this: "the circuit court shall, upon request of a party who did not appeal the judgment or order, determine whether, as a result of the appeal, a party has a right to additional relief in the circuit court which has accrued since the appeal was noted."

A second one is this: "the circuit court shall also order its clerk to disburse any cash bond ...."

A third one is this: "the circuit court shall enter such order as may be appropriate to conclude all matters arising out of the petition or motion filed in the juvenile and domestic relations district court and the appeal in circuit court."

Finally is this: "Unless the circuit court orders that the case remain in the circuit court, the case shall be remanded to the juvenile and domestic relations district court for purposes of enforcement and future modification and shall be subject to all the requirements of § 16.1-297."

Justice Kelsey seems to think the drafters left some words out if their intent was to create a remand by operation of law in the absence of express language in the circuit court's order. Justice McCullough might have been leaning the other way, that a construction that requires an express remand makes much of No. 4 meaningless.

The justices asked some questions about what happens in real life. I hope that whichever side loses the case will file for rehearing and get amicus briefs from the specialty bar groups to address the Supreme Court's questions at the argument.

Posted by Steve Minor at 4:48 PM No comments:

In 1871, Congress split the U.S. District Court for Virginia back into two districts, Eastern and Western, with court sessions to be held in the Western District at Lynchburg, Abingdon, Harrisonburg, and Danville. (Charlottesville, Roanoke, and Big Stone Gap were added later.) The original act did not mention Dickenson County, which was not formed until 1880. 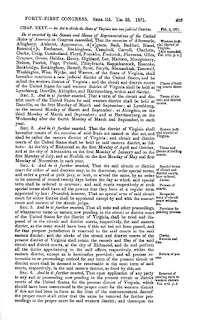 Posted by Steve Minor at 5:30 AM No comments: 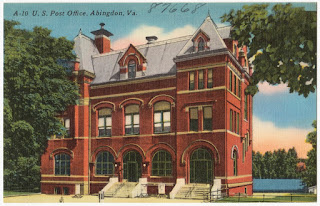 Here is an old postcard with the image of the Abingdon federal courthouse as it was before 1945. 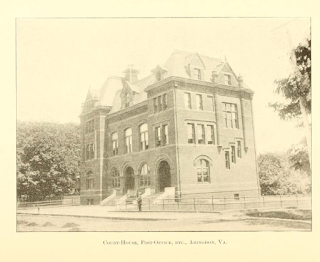 Here is a photograph of the same building taken in 1901. 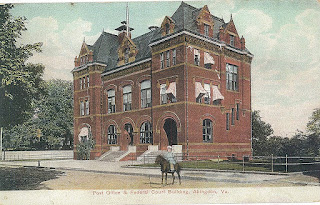 Here is another postcard view, with awnings and the flagpole.

Posted by Steve Minor at 4:31 AM No comments:

Isaac Chapman Fowler (1831-1905) was a Bristol newspaperman, a promoter of the Natural Tunnel at Duffield, the mayor of Goodsonville before it became Bristol, and a member of the Virginia House of Delegates where he was made Speaker of the House (one of only two from the far Southwest in the history of the Commonwealth). In 1884 he moved to Abingdon when he was appointed to be the Clerk of the U.S. District Court for the Western District of Virginia at Abingdon. He was a "dyed-in-the-wool" Republican. When he died, the Republican paper in his hometown of Tazewell reported that he had lived "a long life of usefulness." He is buried in East Hill cemetery. His house in Bristol built in 1867 is still standing as is the house he bought in Abingdon across from the Martha Washington Inn.

While he was in the House, Fowler's main critic was Leonidas Baugh whose newspaper was the Abingdon Democrat. Fowler outlived Baugh by many years and so there was no comparable headline in the Abingdon Democrat declaring Fowler had lived a long life of not being useful.
Posted by Steve Minor at 11:11 AM No comments: