Chrissy was a former Death Row inmate, whose sentence was commuted to house arrest, when we brought her home from the Animal Shelter. Still, she felt the Call of the Wild, and lived in absolute certainty that beyond the friendly confines of the fences of our backyard, there were kitties and squirrels running amok, and other puppies wanting to play. So, Chrissy sought every way she could to see more of the Outside. When a misplaced winter boot knocked off a chunk in the side gate, leaving just enough room for a black nose and two black eyes, ever after the puppy Chrissy used that spy hole to peer out at the Town.

The house where we lived was old and odd. At one time in its history it had been rented out as two apartments, upstairs and down. In the back, there was a rickety wooden staircase leading up to the small deck by the upstairs door. The kitchen and downstairs bathroom were a single story, attached to the back of the house, next to the stairs. From the deck atop the stairs, the puppy learned she could slide through the rails and step on to the shingled roof of the kitchen.

"What's that?" asked my wife, standing at the bathroom sink. She heard a noise on the roof above her, and looked up to see the puppy's tail swishing above her. The dog had walked over the crest of the kitchen roof, so she could peer around the corner to see the World, and now she could also look through the sky-light down into our bathroom. We ran out to the backyard to rescue the puppy. Terry, the next door neighbor, hollered out, "Hey, Steve, you've got a dog on your roof."

From then on, we had to block the stairs, so the puppy could not go all the way to the top. So long as we lived there, the dog lounged on the stairs. When she grew too old and wide to fit through the rails, she liked to sleep under the stairs, on the cool bricks, peering out at trespassers in the alley behind the house -- the kitties and squirrels and sometimes dogs and people. If they trespassed too long, Chrissy would run up the length of the yard to bark at them through the wire fence. As for the squirrels and the kitties who dared to set foot inside the fence, the puppy chased after them, hoping to sink her teeth into their swishy-swishy tails.

As Chrissy became old, we moved from the old house with the rickety stairs to a new place, in a neighborhood with many dogs, and bunnies and squirrels, and little girls who called out, "Hey, can we pet Chrissy?" There was an exciting boy-dog across the street. Chrissy won every staring contest with the curious young cows who caught her eye in the field behind us.

But in the years at the new house, our walks got shorter and shorter. At first, she could walk to the other end of the street, then just to the stop sign, then just two doors down, then one door, then to the mailbox, then not at all. To the end, she took in a breeze like some people take in a concert, with her head back, eyes blinking, enjoying the the full range of the symphony of scents. Her last day was Wednesday, a sunny day, the hardest day.
Posted by Steve Minor at 11:49 AM No comments: 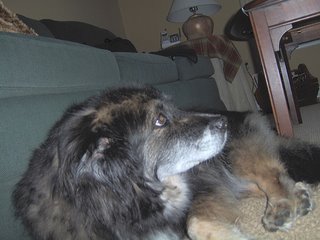 What I got myself for Christmas

Thanks to Robbie and the Mid-Mountain men.
Posted by Steve Minor at 4:35 PM No comments:

Jimmy Stewart and his old dog

With the end near for our dog, I am reminded of Jimmy Stewart's poem about his dog, which is more compelling when you watch this clip from the Tonight Show.
Posted by Steve Minor at 11:41 AM No comments:

The Washington Post has this article about how the so-called balance of power on the Fourth Circuit may change if the Bush administration continues to fiddle with the increasing number of vacancies.

One quote from the article: "Imagine the people Hillary Clinton would appoint to the 4th Circuit."

That's what I did here. I note that Ms. Tate is tight with the Senator Webb camp, that's one way to become a federal judge.

There's a typo in that earlier post, I wrote Nadine "Strosser," when I meant Nadine Strossen. "Strasser" was the name of the evil Nazi major shot by Bogart at the airport in the final scene of Casablanca. I apologize for this error.
Posted by Steve Minor at 11:17 AM No comments:

It says here that the Board of Trustees of the Appalachian School of Law have selected Professor Wes Shinn as the new dean.

Professor Shinn at one time was part of the Stone Pigman firm in New Orleans. (I always look people up on Westlaw.) Stone Pigman is, among other things, the liaison counsel for Merck in Louisiana where the Vioxx MDL proceedings are ongoing.
Posted by Steve Minor at 3:37 PM No comments:

The Washington Post reported here on the dismissal of litigation against the dairy industry for promotion of the "dairy diet." The article says in part:

"But a federal judge has ruled that under Virginia law, Holmes and other people can't take on the industry in court -- only a government entity such as the Virginia attorney general's office can. The decision last week by U.S. District Judge Leonie M. Brinkema in Alexandria threw out the lawsuit Holmes filed last year.

In her ruling last Thursday, Brinkema said Virginia consumer protection law allows people to seek monetary damages but not a broad injunction regulating an industry. She did not address the science of the debate, writing that such federal agencies as the Food and Drug Administration and the Federal Trade Commission are better equipped to do so.

In the lawsuit, filed in Alexandria Circuit Court and moved to federal court, the physicians committee accused the dairy industry of promoting the weight-loss notion through a "massive, deceptive advertising campaign." The committee says overwhelming scientific evidence shows that dairy products cause weight gain or have no effect. The only studies showing otherwise, the committee contends, are industry-funded.

Holmes is the sole plaintiff in the lawsuit, filed against such companies as General Mills Inc. and the Dannon Co. Inc. and three dairy industry trade groups. In addition to damages for Holmes, the suit seeks an order halting the dairy industry campaign."
Posted by Steve Minor at 2:49 PM No comments: