Here's an old Chrissy picture I just found on this machine. I was talking about her this week, or trying to. 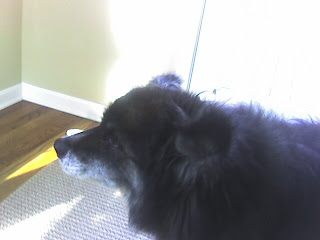 Posted by Steve Minor at 9:12 PM No comments:

Well, we had a trial this week and lost. The Kingsport paper has this account.

As I've written before, I've been in a number of these Elrod cases, and the Democrat side has won every time, as plaintiffs and as defendants, regardless of the judge or the jury division (Big Stone Gap, Abingdon, Roanoke), except for one case where the verdict was overturned on appeal.

In law school, I met John Tucker, the husband of Professor Jayne Barnard, who represented the plaintiffs in the Elrod case, and who wrote a lively and entertaining book about that case and others from his law practice in Chicago.

"At trial, the defendant moved for judgment as a matter of law on emotional distress damages, citing the Fourth Circuit’s decision in Price v. City of Charlotte, 93 F.3d 1241 (4th Cir. 1996). The Price court dealt with two issues related to damages. One was the quantity and quality of proof necessary to support a damages claim. The other was the kind of causation that must be shown for the plaintiff to recover.

In Price, the Court noted that "[t]raditionally, common law courts have been reticent regarding compensatory damages in the absence of a physical injury.” 93 F.2d at 1250. "Empathizing with the trepidation of common law courts in analyzing such claims, the federal courts have recognized that emotional distress claims arising from constitutional violations are not immunized from the nebulous, speculative character that plagues their common law analogues." Id. The Court observed that "the only evidence of Appellees’ emotional distress was their own testimony." Id.

The Price court examined a number of opinions where emotional distress verdict were rejected and distilled the factors on which the courts relied. Other later opinions are consistent with the analysis in Price. In Patterson v. P.H.P. Healthcare Corp., 90 F.3d 927 (5th Cir. 1996), the Fifth Circuit struck the emotional distress award in a section 1981 case and directed the court on remand to award only nominal damages. The Court observed:

In order to establish intangible loss, we recognize that Carey requires a degree of specificity which may include corroborating testimony or medical or psychological evidence in support of the damage award. . . . Hurt feelings, anger, and frustration are part of life. Unless the cause of action manifests some discernible injury to the claimant’s emotional state, we cannot say that the specificity requirement of Carey has been met. Consequently, based on the above reasoning, we hold that the district court abused its discretion in awarding emotional distress damages to Brown on his § 1981 claim. We vacate the district court's $40,000 emotional distress award and remand the case with instructions for the district court to award nominal damages.

Patterson, 90 F.3d at 940; see Annis v. County of Westchester, 1998 WL 49317 at *10 (2d Cir. 1998) (vacating verdict for employee-plaintiff on grounds that plaintiff’s uncorroborated testimony was insufficient to warrant an award of emotional distress damages, where there were no physical manifestations and plaintiff remained employed).

The point of Price is that the causation that is required is that the constitutional violation must cause the damage, as distinct from the loss of government benefits incidental to the violation. "[C]ompensatory damages for emotional distress must be attributed to the actual constitutional violation, as opposed to the denial of the ultimate benefit, and must be proved by a sufficient quantum of proof demonstrating that the violation caused compensable injury." Price, 93 F.3d at 1246 (citing Carey v. Piphus, 435 U.S. 247 (1978)). "Carey . . . teaches that compensatory damages for emotional distress are available for a constitutional violation, but must be attributed to the invidious discrimination, not to the deprivation of an ultimate benefit, to recover more than nominal damages, actual injury must be caused by the constitutional violation must be proved by sufficient evidence." Id. The Price court observed its earlier decision in Burt v. Abel, 585 F.2d 613 (4th Cir. 1978) (per curiam). "In remanding, we observed that in order to recover such damages, Burt must prove that her injury flowed from the denial of due process, not from termination of her teaching position, the denial of her ultimate benefit." Price, 93 F.3d at 1247.

Applying this discussion to the facts of Price, the Court observed "Appellees must establish that their injury is grounded in the denial of equal protection, not their lack of promotions." Id. at 1248. Similarly, the burden is on the plaintiff in this case to prove that his damages were caused by the constitutional right, and not the deprivation of the ultimate employment benefit.

Where the Court is convinced that a damages award is excessive, it may order a new trial, a new trial on damages, or a remittitur. Defendant has argued above, based on Price, that judgment as a matter of law should be entered. In the alternative, if the Court is of the view that some amount of emotional distress may be recoverable, nevertheless it should order a new trial or direct the remittitur of the award, on the basis of Price and Hetzel v. County of Prince William, 89 F.3d 169 (4th Cir. 1996).

In Hetzel, plaintiff claimed to be the victim of various forms of unlawful discrimination, although she was not discharged. The jury rejected all but one of her claims, yet awarded $750,000 for her emotional distress, which the District Court reduced to $500,000. 89 F.3d at 170. The appeals court reversed and remanded, concluding that the damage award was excessive as a matter of law.

As in this case, Hetzel relied exclusively on her own brief, conclusory statements to prove her emotional distress damages. She kept her job, never sought counseling, suffered no impairment of job performance, and presented no corroborating evidence. 89 F.3d at 171. "Hetzel’s thin evidence of rather limited damages would in-and-of itself entitle her to only a minimal award of damages." Id. The Court also observed the problem of causation, that most of Hetzel’s was caused by factors other than the claim on which the County was found liable. Id.

"That this award is outrageous is confirmed by even a cursory analysis of the impressive array of cases cited by appellee . . . . These cases, all of which contained a substantial award of $25,000 or more for intangible injuries such as emotional distress, involved plaintiffs that were either the victims of invidious discrimination, suffered serious — often permanent — physical injuries, or were discharged and had difficulty finding alternative employment." Id. at 172. "In stark contrast to these cases . . . Hetzel suffered no discrimination, was not physically injured, is not under a physician’s care, and remains an officer in good standing." Id.

Based on the analysis in Hetzel, the $85,000 in this case is clearly excessive. The Court should order a new trial. In the alternative, the Court should order a remittitur, with the condition that a new trial will be granted unless plaintiff accepts reduction in the verdict to an appropriate amount, which based on Hetzel could be no more than $15,000."
Posted by Steve Minor at 1:53 PM 1 comment: