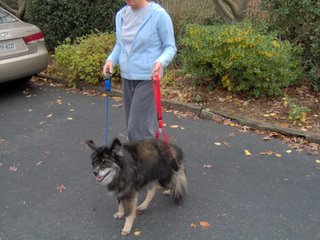 We took the old dog to Midlothian for the long weekend.

I can't say that she had a good time, but in this picture she has her ears up and is ready to see what's going on in the world.

To walk outside, she uses a "rear-end leash" bought from HandicappedPets.com. To walk inside, well, she can't really walk inside any more.
Posted by Steve Minor at 1:08 PM No comments:

Watch what you ask for

From the Winchester paper comes the following tale of the retrial of a wrongful death case, resulting in a sharply reduced verdict for the grieving widow:

Widow of motorcycle crash victim gets $1 for sorrow, nothing for economic losses

Winchester — The widow of a motorcycle accident victim will receive $1 for her sorrow and nothing for her economic losses, a jury decided on Thursday.

The Frederick County Circuit Court jury made its ruling in the retrial of a wrongful-death suit that had awarded $961,065 to the survivors of the crash victim.

The wrongful-death lawsuit — filed by Wright’s widow, Christa — claimed that the Minnick’s tow truck driver, Bernard W. Everhart Jr., drove recklessly and backed into the road without looking for traffic, which caused Wright to crash after trying to avoid the truck.

On March 31, jurors in the first wrongful death trial awarded the plaintiffs — Christa and Anthony’s brother, Michael Wright — $10,534 for hospital expenses, $7,996 for funeral costs, and $942, 535 for the loss of income, services, protection, and care that had been provided by the victim.

A new trial was ordered after the jurors failed to award an amount to the plaintiffs for their sorrow.

Legally, the jurors should have awarded some amount, which could have been as low as $1.

On Thursday, the new jury awarded Christa $10,534 for hospital expenses and $7,996 for funeral expenses. She received $1 for her sorrow and nothing for her economic loss.

“They killed him and that’s it!” she said as she dropped to the floor screaming and crying in the hallway of the courthouse after the verdict was read.

Taking the stand on Thursday, Christa Wright fought back tears as she told the court she and her husband of 12 years were soulmates.

But James T. Bacon, the attorney for Minnick’s, argued that Anthony was separated from Christa at the time of the accident and that she should not profit from his death.

Witnesses testified that the couple were estranged at the time of the accident.

Bacon asked the court to award Christa $1 for her anguish and nothing for the loss of income.

He also said Christa was with a boyfriend at the time of the accident.

Christa admitted that she stayed with the man the defense described as her boyfriend after Anthony’s death, but said they were just friends.

She also admitted having an intimate relationship with Anthony’s brother, Michael, after her husband’s death.

Michael, who Plofchan called to the stand on Thursday, said his brother and Christa had mentioned going to see a divorce attorney, but had called it off.

In his closing arguments, Bacon asked the jurors not to award Christa the $1 million the prosecution was asking for. “The plaintiff would not have profited while her husband was alive, and she should not profit from his death,” he said.
Posted by Steve Minor at 1:10 PM No comments:

Here is a story about a Virginia general district judge in a fishing contest.
Posted by Steve Minor at 12:56 PM No comments:

Via Blog 702, the Tenth Circuit in Sims v. Great American Life Ins. Co. takes on the interplay between the Erie doctrine and the Federal Rules of Evidence.

The gist is that Erie does not apply to matters covered by the FRE, but nevertheless state policy informs the application of the FRE.
Posted by Steve Minor at 12:05 PM No comments:

On democracy in action

Judge Posner has this interesting commentary on the 2006 election - the gist being, the system works.

Balkin has this interesting post on how it's not over yet for the conservatives - the gist being, conservatives never quite got control, but their fortunes can be somewhat retrieved in 2008.

The Richmond paper points out that changes in the Congress will mean less clout on the Hill for Virginia, although they might mean more clout for Southwest Virginia with Boucher back on the majority side.
Posted by Steve Minor at 11:53 AM No comments:

Chad packs it in

My good friend Chad Dotson is going to stop blogging, going the way of past favorites Jaded JD, Have Opinion, and Sic Semper, among others.

I've known Chad for several years and he's had his fun with the blog but I think that it has also made some history. I've learned a lot reading his blog, and met a lot of people who read it and had something to say about it.

Here was my first Chad Dotson post, and here was more of the same.
Posted by Steve Minor at 1:51 PM No comments: