This Wikipedia entry lists common surnames associated with Melungeons: "Almost every author on this subject gives a slightly different list of Melungeon-associated surnames, but the British surnames Collins and Gibson appear most frequently (genealogist Pat Elder calls them "core" surnames). Many researchers also include Bowling, Bunch, Denham, Dunaway, Goins, Goodman, Minor, Mise, Moore, Mullins, Rose, Williams, Wise, and several others (though this does not mean that all families with these surnames are Melungeon)."

Speaking of Collinses and Minors, here's my great-grandmother with her second husband, a fellow named Morgan Collins, and one of their Minor great-grandsons in Lee County in April 1965. 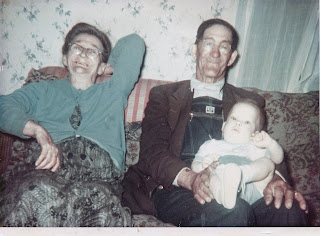 I'm excited to attend the investiture this afternoon of Judges Carico and Dotson, and it seems as good a time as any to recall tales of swearings-in past.

On the day when Justice Kinser was sworn in at Lee High School in Ben Hur, it was a great day. I rode over from Bristol with Jim Green and Joe Lyle. Afterwards, as the day was fine, I suggested that instead of going straight back to Bristol, we should detour to see my grandmother on the other side of Jonesville, and so we did. We almost missed her, she arrived as we were walking back to the car. You could hear the gravel fly as she mashed the brakes when she realized there were three men in dark suits standing in the road in front of her house. She came on, and oh, she was so glad to see us, and how handsome we were, she said, in our lawyer suits. We began trying to explain to her what we were doing in Lee County that day. I told her we had been to the high school. She said, "oh, were you taking a course?" "No, Grandma, we were there for a ceremony." Jim began telling her what a historic event it was, the elevation of a lawyer from Lee County to the highest court in Virginia.

But Grandma was unimpressed. She replied, as only a grandma could: "Well, now, Steven will be right up there soon."

Some years later, I attended the event for Judge Freeman at the Lincoln Theatre in downtown Marion. Following some good advice from Judge Flannagan, Judge Freeman studied the crowd, to savor the moment. When it came his time to speak, he said essentially this: "I've been looking out at you during the speeches, and I know every one here. And I know that each of you knows at least one story which if declared publicly would have kept me from ever becoming a judge." His words had the power of a hypnotic suggestion - there was a moment of silence as each person searched his or her mind, then everyone laughed.

Of course, Judge Freeman, the accomplished storyteller that he is, exaggerates sometimes.
Posted by Steve Minor at 11:33 AM 1 comment:

On getting a haircut

When I got married and we set up housekeeping in town, the nearest place to get a hair cut was up the street, and so I started going there. Sixteen years later, the same woman cuts my hair but she has cut back to working just one day a week. In the meantime, I've moved, and she's moved a couple of times. She's had trouble with carpal tunnel syndrome. Often she has bandages on her wrists. I don't know what she charges. I would pay her more, and sometimes do.

Usually, I get my hair cut about every three months, need it or not, more often would be a waste. The last thing I want is to get someone new to cut my hair, and so I often complain that I cannot manage to coordinate my schedule with hers, but I get no sympathy. The general response is some questioning about why I find it imperative to have someone with reduced feeling in her hands come at my neck with scissors.

For a while when I was a kid in Abingdon, we patronized Flanary's Barber Shop on Main Street. He had a sign that read, "No long hair styles." I don't recall that he used scissors, rather he buzzed everyone equally in a manner as short on length as it was short on "style." He had a drawer full of bubble gum, a sample of which came with the price of a trim.

If I have to switch hair cutters, I hope I can at least find one with bubble gum.
Posted by Steve Minor at 10:47 AM No comments:

IM000226
Originally uploaded by swvalaw.
A lounger, just like the old one.
Posted by Steve Minor at 7:25 PM No comments:

My wife ordered one of these and it has arrived in Roanoke.

On leave to amend, stigmatization, and Mooks

In Sciolino v. City of Newport News, the Fourth Circuit in an opinion by Judge Motz reversed Judge Jackson for denying the plaintiff leave to amend his section 1983 claim against the city and its police chief, Chief Mook, based on the murky area of the deprivation of "liberty" in the form of stigmatization by the government. Judge Wilkinson dissents at some length, complaining that the majority opinion admits of the possibility that "a document in a government file drawer can violate a constitutional liberty interest in reputation and future employment."

What struck my imagination, of course, was the name of the Chief, recalling Law and Order's Lennie Briscoe, who once said the answer to question what did the police detective do today was that he had "arrested a couple of mooks." The term "mook" was previously unknown to me. The only Mook I had heard of was the fellow who hit the ball through Bill Buckner's legs in the 1986 World Series, the famous image of which you can buy framed for $199.
Posted by Steve Minor at 10:27 AM No comments:

"The Top Ten Films in America Festival will be held in the mountains of southwestern Virginia in the Town of Fries and the City of Galax, April 19-22, 2007. The film festival is sponsored by the Town of Fries, The Galax City Department of Tourism, the Fries Recreation Center, The Carroll County Department of Tourism and the Drydock Film Corporation. Venues will include the Fries Theater in Fries and the famous REX Theater in Galax. There will be a separate acting competition during the film festival in which winners will have the opportunity to present their acting talents in front of film producers and talent agents. The film festival will showcase films in the categories of Feature Films, Short Films, and Documentaries with a special category for Foreign Films. As has been the tradition, the Backroads Radio Show will be broadcast from the REX Theatre on Friday night and film festival attendees will be able to sit in on the show which focuses on the best of mountain traditional and Bluegrass music. Film makers may submit directly from the festival web site or through Without A Box online.

Drydock Film Corporation, one of the film festival sponsors is also scheduled to have the Virginia Premiere of MORNING SONG WAY, during the festival on Friday April 20th in Fries and again on Saturday April 21st at the REX Theater in Galax. The film will be coming up from its Florida premiere at the Delray Beach Film Festival March 17th at 5:P.M. MORNING SONG WAY was the first production by the company which has produced two motion pictures in a little over a year both of which were filmed in Virginia and North Carolina and both of which star Virginia actors. MORNING SONG WAY with a largely Native American cast is the story of a little girl who witnesses a murder and is hidden up in the mountains of Virginia with her great uncle, a Native American Medicine Man. It is a very powerful film about the topic of cultural loss. MORNING SONG WAY has already been in film festivals in Los Angeles and New York and has won eleven awards so far including Best Dramatic Film at the Native American Film Festival in Columbia, South Carolina and four honorable mentions at the International Cherokee Film Festival sponsored by the Cherokee Nation of Oklahoma. It is mentioned in the March/April issue of NATIVE PEOPLES magazine, one of the largest Native American magazines in North America, Virginia actress Jennifer Redbird is from the area around Fries where most of the picture was filmed and Glenda Bean lives in the Brush Creek Community right on Brush Creek. Both of them star in the film. Bean is a Catawba/Cherokee Indian and Redbird is of white, Hispanic, and Ani-Stohini/Unami descent. Roanoke native Brian Hall also has a strong supporting role in the film. Although the movie will not be eligible for any awards at the festival since Drydock is one of the festival sponsors, it is hoped that the Premiere will help to promote the festival and help to bring celebrities in. Virginia actors Brian Hall and Chris Bookless also have a supporting role in the film. The movie also stars famous Native American Blues guitarist Elvus Kishketon, Jr., and Seminole/Creek Actor Jeff Anderson, both of Oklahoma and includes soundtrack music by Joseph “Z”, and Jerry Eaglefeather Monroe."

Another film, by Drydock, SPIES and MOLASSES, which completes filming this month also stars Glenda Bean and Brian Hall. It is a romantic comedy, spy, martial arts film and also stars Chippewa(Ojibway) Indians Brooke Hidde, and Dawn St. Marie. Atlanta celebrity and martial artist Jessica Vines also stars. The majority of the Drydock family of actors from both films will be in attendance at the festival along with personal friends of film Director Charles Howard Thomas and invited celebrities and guests.

There will be a red carpet in front of the theaters for all films which will premiere during the film festival and a chance for the press to shoot celebrities. After each premiere, there will also be a chance for festival goers to question the stars after the showing of the films."

I once asked the correct pronunciation of the name of the Town of Fries, and was told that it's Fries like French Fries in the summer and Freeze in the winter.
Posted by Steve Minor at 10:18 AM No comments:

The Bristol paper reports here on the life and times of Kenneth Asbury, a Wise County lawyer who was instrumental in the founding of what became the University of Virginia - College at Wise.
Posted by Steve Minor at 12:14 PM No comments: