Longtime readers of this blog would know that I am interested in Southwest Virginia lawyers and judges from days gone by, and I mostly wrote the Wikipedia articles for several of them, including Judge Robert William Hughes. Judge Hughes died in 1901 and was buried in Abingdon. A few months back I went and found the plot with the monuments for Judge Hughes and his wife and her parents. 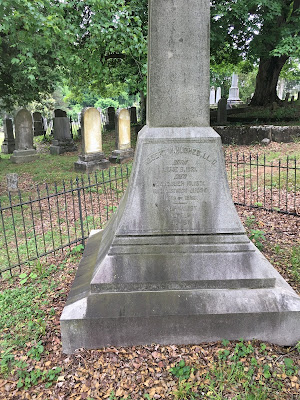 Posted by Steve Minor at 2:59 PM No comments:

On the judicial vacancy in the W.D. Va.

I noticed that Judge Glen Conrad took senior status in December, and that Judge Urbanski is now the Chief Judge of the W.D. Va. Judge Conrad is and was much admired among the people I've known at the courthouse, including Judge Williams, who thought he was great. The last time I had a case before Judge Conrad, he approved a recommendation to grant summary judgment for my client in a prisoner case out of Red Onion. Donohue v. Lambert, Case No. 7:13-cv-00397, 2015 WL 9200926 (W.D. Va. Dec. 16, 2016).

In 2014, when Judge Dillon was selected to replace Judge Wilson, the two other leading candidates rated as "highly qualified" by a committee of the Virginia State Bar were Magistrate Judge Robert Ballou and the Clerk of the Western District, Julie Dudley. I know Judge Ballou a little bit and I know Ms. Dudley a little bit more, both of them fine people. Judge Ballou was at the University of Virginia at the same time I was and I knew who he was then. Later on we had some fun with a state court case in Scott County.

Ms. Dudley clerked for Judge Williams. Years ago I took Jill to the last of the law clerk reunions for the judge and I told her that Julie Dudley might be there and that she was one of Judge Colin Campbell's daughter's from Grayson County, and it turned out that Julie Campbell was one of Jill's babysitters, back in the day.
Posted by Steve Minor at 1:14 PM No comments: